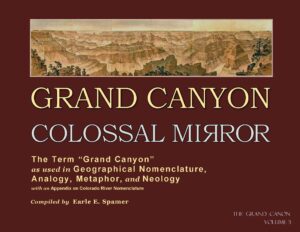 All the Grand Canyons in the world (and then some)

PLUS . . . Analogies and metaphors enough to fill the Grand Canyon!

This is a comprehensive list of the “other” Grand Canyons—physical, imaginary and literary—around the world and on other worlds. It identifies more than a thousand usages of the term, “Grand Canyon”, as applied to other geographical features and as used in analogy, metaphor and neology.

This publication, variously updated, had originally been appended to the 1st–3rd editions (2012, 2015, 2019) of THE GRAND CANON : A Worldwide Bibliography of the Grand Canyon and Lower Colorado River Regions of the United States and Mexico.  It is now formally a third volume of THE GRAND CANON series.

As a world wonder, the nominal attribute, “Grand Canyon”, has been copied and rephrased for hundreds of other locales the world over, and on other celestial bodies. In some fashion, formally, or far more often informally, these places are called “The Grand Canyon”, the “Grand Canyon of” a certain place, and variously as “another” Grand Canyon of one sort or another. Occasionally there even are “grander” and “littler” Grand Canyons. A majority of the listings here are extracted from the ephemeral postings of internet websites; the remainder appear in conventional publications. These comprise a unique perspective of the extenuating powers of impression that the Grand Canyon has held ever since the first “other” Grand Canyon was named (the Grand Canyon of the Yellowstone, in 1870).

“ Who named the Grand Canyon? ” has been a recurring question for more than a century, but the truth is that this person still has not been discovered. The Colorado River’s “Grand Canyon” was first labeled by that name by Lorin Blodget in his Climatology of the United States (Philadelphia, 1857); this was twelve years before John Wesley Powell’s first Colorado River trip and even before Joseph C. Ives debarked for the mouth of the Colorado River later in 1857. Even though Ives’s party was the first exploring expedition to purposely reach the Grand Canyon, in 1858, they knew it only as “Big Cañon” and “the Great Cañon”. Blodget did not specify whether he obtained the Grand name from somewhere or if was his neological improvement over “big” and “great”.

Grand Canyon’s name realistically awaited John Wesley Powell, who brought “Grand Canyon” into the collective conscious­ness and literature of the world just before, during and after his widely followed first expedi­tion through the canyons. Though Powell began using the Grand name prior to his 1869 trip, he did not indicate that he had gotten it from somewhere, nor in fact did he ever take credit for it, even though he reported in his celebrated travelogues that he and his crew named other canyons of the Green and Colorado Rivers. When they had finally arrived at Grand Canyon, it already had a name. On the other hand, Frederick S. Dellenbaugh, the teenaged member of Powell’s second expedition of 1871–1872, who also worked with Powell on the first maps produced of the Grand Canyon region, gave Powell all the credit for the name (though it should be kept in mind that Dellenbaugh idolized Powell all his life). He mistakenly said Powell gave the canyon its name after the conclusion of the first expedition, and he (Dellenbaugh) was proud to recollect that it was he who was the first to ink the name on a map, during the Kanab layover of the second expedition. Unfortunately, to this day people say Powell named the Grand, simply because he was for years, and remains, the hero–explorer of the Colorado.

Moreover, the Grand Canyon’s overwhelming attraction to comparison is wealthily displayed in the associ­ative, meditative, and creative traditions of analogy and metaphor; a separate listing herein itemizes many examples, likewise from published literature but chiefly from web-posted material. I believe that it is imperative to capture these numerous geographical and literary uses, at least in summary form, particularly from the ephemeral postings of the web. Each conveys the concept of a canyon; but specially for all of them, the measure is The Grand Canyon—and no other canyon than the one in Arizona!

This material is like a musical canon that has a melody and repeated imitations of it. In also extracting concepts of the physical and conceptual Grand Canyon for other applications, each example in these literary compilations is a hyponym to the real Grand Canyon that is their hypernym. The number of places and phrases recorded here dramatically emphasize the tremendous attraction that the Grand Canyon has had on people from the time when the first “other” Grand Canyon was named after it. Most examples are informal, yet they have been used and thus they should be accounted for as a matter of literary and intellectual record. This is effectively a documentary record of the creative work of a very large number of people.