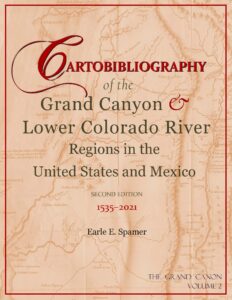 To download the Cartobibliography click on this button.  (If you wish to obtain the 1st Edition, use the button at the bottom of this page.)

SPECIAL NOTE: In Sections 4A and 4B of the Cartobibliography, some illustrations embedded in the PDFs that depict the system of topographic map quadrangles (which had been replicated from old-style paper copies) do not sufficiently display the quadrangle names when the PDFs are enlarged.  Click on the buttons below to download high-resolution JPEG images of these maps.

The Cartobibliography is Volume 2 of The Grand Canon : A Worldwide Bibli­og­raphy of the Grand Canyon and Lower Colorado River Regions in the United States and Mexico. It itemizes and often describes details on maps produced worldwide from the 16th to 21st centuries. Many citations for historical maps before the 20th century are choro­graphical; attention is on part of the map rather than the whole, in order to describe how the Grand Canyon and lower Colorado River regions are portrayed. Thus the principal pur­pose of the map may not be mentioned, such as when a map is of wider interest to cartographic histo­rians for content that is unrelated to the physical geography of the Southwest. In some instances, remarks correct or amplify the work of earlier bibliographers. All forms of maps are listed: general, geologic and physio­graphic, and certain specialized maps; to which is added a complete guide to all scales of topogra­phic map quadrangles in the greater Grand Canyon–lower Colorado River regions in the U.S. and Mexico, produced by the U.S. Geological Survey and Mexico’s Instituto Nacional de Estadística y Geografía (as also used by the Servicio Geológico Mexicano). The kinds of maps cited here vary. Many are stand­alone productions, while others are included in atlases or accompany reports of explora­tions, some of them as large fold-outs, others as maps loosely laid in or even grouped in separate covers. Maps that appear as illustrations within books and periodicals are not generally considered. Neither are manuscript maps consid­ered, although a few significant ones are cited; those that are of seminal impor­tance in the history of the Grand Canyon and the Southwest. Notes added to these citations provide more detailed information that describe relationships between features of physical geog­raphy, for the benefit of users who may thus determine that a map should be more closely examined, or it may suggest to them that a map is not of interest to work at hand. The Cartobibliography divides maps into two major groups: 16th–18th cen­turies, and 19th–21st centuries; and there is a separate, consolidated chronological list of these maps. The 16th to 18th centuries in this region recorded human interactions that focused on the lower Colorado River, by inter­national parties with interests in the region. Only manuscript maps ventured to embrace the area that now is known to be the Grand Canyon. The 19th century saw the first sponsored explorers in three centuries span­ning the region, eventually delineating the Colorado River and its tributaries correctly, discovering again the Grand Canyon. And the 20th century witnessed an explosion of general and scien­tific maps of the region, including topographic mapping at large scales. More specifically detailed bibliographical products and statistical surveys can be derived from this Cartobib­liography.

Users who wish to obtain the 1st Edition of the Cartobibliography (2021) click on this button:

Mapping Grand Canyon is divided into four major sections. Each concentrates on one of the principal names by which Grand Canyon was called during the past three centuries, which have appeared on maps though of course not necessarily with any degree of formality or consistency: Puerto de Bucareli (1777–1872), Big Canyon (1853–1888), Great Canyon (1853–1879), and Grand Canyon (1868–present). The citations are extracted from Cartobibliography of the Grand Canyon and Lower Colorado River Regions in the United States and Mexico (4th Edition, 2022, Volume 2 of THE GRAND CANON series). It offers up a historiographical listing specifically for the Grand Canyon country. 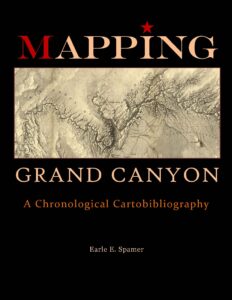